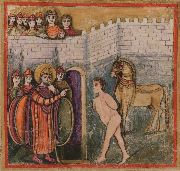 Sinon as a captive before the walls of Troy
From Vergilius Romanus (Roman Virgil), a 5th-century illuminated manuscript based on the work of Virgil
Artist unknown
Previous week’s theme
There’s a word for it

Where there are humans, there are stories. Some stories have such strong roots in our psyche that we have coined words after characters in them. We call such a word an eponym, from Greek epi- (upon) + -onym (name). The English language has thousands of words coined after people, both real and fictional. This week we’ll feature five, coined after fictional people.

MEANING:
noun: One who misleads or betrays.
ETYMOLOGY:
After Sinon, a Greek who, by his false tale, persuaded the Trojans into taking the wooden horse inside Troy. From Greek sinomai (to harm or hurt). Earliest documented use: 1581.
NOTES:
Sinon, a Greek, was found by the Trojans all by himself. He told the Trojans that the Greeks had left and abandoned him because of his rivalry with Odysseus. He said that the Greeks had made the wooden horse as an offering to gods to help them have a safe journey home. He claimed that they made the horse really big so Trojans couldn’t take it inside the city. The Trojans fell for his story, dragged the horse inside, and the rest, as they say, is mythology.
Sinon was the grandson of Autolycus, known for his skill in theft and trickery. Autolycus himself was the son of Hermes, the god of cunning and theft, among other things. With a lineage like that...
USAGE:
“Samir was excited. So there was a man on the inside, close to the prime minister. A Sinon.”
Dan T. Sehlberg; Mona; Scribe; 2014.

See more usage examples of sinon in Vocabulary.com’s dictionary.
A THOUGHT FOR TODAY:
It is a curious thing that every creed promises a paradise which will be absolutely uninhabitable for anyone of civilized taste. -Evelyn Waugh, novelist (28 Oct 1903-1966)