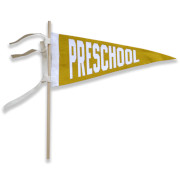 MEANING:
noun:
1. A long tapering flag.
2. A flag symbolizing a sports championship or another achievement.
3. A victory, championship, etc.
ETYMOLOGY:
A blend of pendant, from Latin pendre (to hang) + pennon, from Latin penna/pinna (feather). Earliest documented use: 1470.
USAGE:
“Earl squinted into the rising sun, focusing on a blue and white pennant that fluttered from the top of the flagpole.”
Edward D. Hoch; The Frankenstein Factory; Hale; 1976.

“[Jackie] Robinson had to agree to play a season in the minors. With Montreal in 1946, Robinson batted .349. After the team won the International League pennant, he recalled Montreal fans hurrying after him outside the ballpark. He began to run. The crowd ran behind him. He began to weep.
‘I started crying,’ he told me, ‘because I thought here are all these whites running after a Negrο, to get his autograph, not to lynch him.’”
Roger Kahn; The Jackie Robinson I Remember; The Journal of Blacks in Higher Education; Dec 31, 1996.

See more usage examples of pennant in Vocabulary.com’s dictionary.
A THOUGHT FOR TODAY:
All the arguments to prove man's superiority cannot shatter this hard fact: in suffering the animals are our equals. -Peter Singer, philosopher and professor (b. 6 Jul 1946)