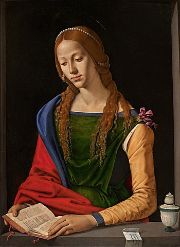 MEANING:
noun: A penitent woman, particularly a reformed prostitute.
ETYMOLOGY:
After Mary Magdalene, a Biblical character who was a follower of Jesus. Earliest documented use: 1563.
NOTES:
The name Magdalene means “of Magdala” in Greek and is derived after a town on the Sea of Galilee. The name Magdala, in turn, means a tower in Aramaic. So here we have a word coined after a person, who was named after a place, which was named after a thing. The word is also used for a home for reformed/retired prostitutes. Magdalene has given birth to another eponym, maudlin meaning “overly sentimental”.

Pope Gregory I, in a sermon delivered in 581 CE, conflated an unnamed “sinner” with Mary Magdalene. Pope Paul VI fixed the error in 1969, but the damage was done. Mary Magdalene forever remains identified as a former prostitute in popular culture. It took them 1,388 years to acknowledge the error. In comparison, Galileo got off easy. The Church took a mere 359 years to say that he was right after all.

So much for ex cathedra! Religion, fighting reality, since, well ... forever.
USAGE:
“Aniseed is inseparably linked in my mind to the bodies of fallen women. It is the madeleine that evokes a Magdalene.”
Jonathan Meades; Filthy English; Jonathan Cape; 1984.
A THOUGHT FOR TODAY:
Poetry is a subject as precise as geometry. -Gustave Flaubert, novelist (12 Dec 1821-80)