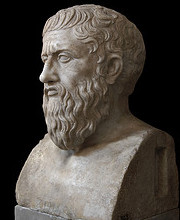 MEANING:
adjective:
1. Relating to Plato or his ideas.
2. Relating to a love free of sensual desire.
3. Confined to words or theories, and not leading to action.
ETYMOLOGY:
After Greek philosopher Plato (c. 400 BCE). Earliest documented use: 1533.
USAGE:
"In trendier circles, the French two-cheek kiss has become the greeting of choice. The two-cheeker happens very quickly and therefore requires a great deal of precision and lip-cheek coordination. For this reason, it's not uncommon, when hopping from one cheek to the other, to wind up planting one on your co-kissee's neck or worse, an earlobe. Then suddenly your platonic gesture is transformed into a strangely intimate moment (particularly baffling if the kissee is, say, your mother-in-law)."
Lianne George; Have a Merry Christmas Kiss; Maclean's (Toronto, Canada); Dec 27, 2004.

"In a rare personal reference, Legrain spoke of the impact of his medical practice on his views: '... living in permanent contact with these victims, I began to understand that the time was no longer appropriate for these platonic efforts that consist of blustering at every turn against the modern scourge.'"
Patricia Prestwich; Paul-Maurice Legrain (1860-1939); Addiction (Abingdon, UK); Oct 1997.

See more usage examples of platonic in Vocabulary.com's dictionary.
A THOUGHT FOR TODAY:
If you are neutral in situations of injustice, you have chosen the side of the oppressor. If an elephant has its foot on the tail of a mouse and you say that you are neutral, the mouse will not appreciate your neutrality. -Desmond Tutu, clergyman (b. 1931)