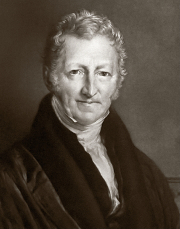 MEANING:
adjective: Relating to the view that population increases faster than its means of subsistence resulting in disaster, unless population is checked by natural calamities or by people exercising control and having fewer children.
ETYMOLOGY:
After economist and clergyman Thomas Robert Malthus (1766-1834), a proponent of this idea. Earliest documented use: 1805.
USAGE:
"For most of the 20th century humanity managed to stay ahead in the Malthusian race between population growth and food supply."
Tim Folger; The Next Green Revolution; National Geographic (Washington, DC); Oct 2014.

"Paul Ehrlich, a biologist of Malthusian disposition, argued in The Population Bomb, a 1968 book, that rising populations would inevitably exhaust those resources, sending prices soaring and condemning people to hunger."
Shocks and Ores; The Economist (London, UK); Jun 6, 2013.

See more usage examples of malthusian in Vocabulary.com's dictionary.
A THOUGHT FOR TODAY:
To see a world in a grain of sand, / And a heaven in a wild flower, / Hold infinity in the palm of your hand, / And eternity in an hour. -William Blake, poet, engraver, and painter (1757-1827)