Sep 5, 2014
This week's theme
Words that have many unrelated meanings 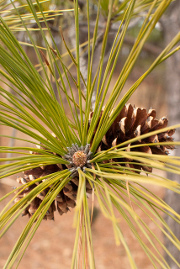 MEANING:
noun:
1. A thick gruel.
2. Mire; mudhole.
3. An assistant to a ship's surgeon.
4. A pine tree with long needles and strong wood (Pinus taeda).
5. An evergreen, loblolly-bay (Gordonia lasianthus).
ETYMOLOGY:
Apparently from lob (an onomatopoeic word representing the sound of bubbling while boiling) + lolly (an English dialectal word for broth, soup, etc.). The use of the word for mire or a mudhole is from the porridge-like consistency of the contents of mire or mudhole. The word came to be used for a medical assistant because he fed the patients. The trees received this name from their prevalence in swamp lands. Earliest documented use: 1597.
USAGE:
"Lawson especially enjoyed a meal of loblolly 'made with Indian Corn, and dried Peaches'."
James E. McWilliams; A Revolution in Eating; Columbia; 2005.

"When the spring thaw finally came, everything outside that was not concrete or asphalt turned into a total loblolly mess."
Gary Tucker; The Day Jim Got Shot and Other Semi-Truthful Stories; AuthorHouse; 2010.

"They brand each other with their wedding rings and too soon get caught in a loblolly of the unforeseen, he says."
Susan Froderberg; Old Border Road; Little, Brown and Company; 2010.

"The loblolly looked frightened. 'I -- I don't know!' he whispered. 'But you've been surgeon's mate all this while,' Renzi coaxed."
Julian Stockwin; Artemis; Scribner; 2002.

"Violent winter weather has left scores of trees bent, bowed, and broken across the continent, but the most famous succumbed at Augusta National, home to the Masters golf tournament. Club officials said there was no saving the famed 'Eisenhower tree' that loomed menacingly over the left side of the 17th fairway. Ironically enough, the 100-year-old loblolly pine was named for the US president (and frustrated club member) who unsuccessfully petitioned to have it chopped down nearly 60 years ago."
Good News; Maclean's (Toronto; Canada); Mar 3, 2014.

See more usage examples of loblolly in Vocabulary.com's dictionary.
A THOUGHT FOR TODAY:
Plenty of kind, decent, caring people have no religious beliefs, and they act out of the goodness of their hearts. Conversely, plenty of people who profess to be religious, even those who worship regularly, show no particular interest in the world beyond themselves. -John Danforth, priest, ambassador, senator (b. 1936)