Jan 25, 2012
This week's theme
Words from the Mediterranean 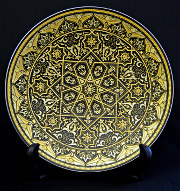 MEANING:
verb tr.: To inlay a metal object with gold or silver patterns; to gild.
noun: A native or inhabitant of Damascus.
adjective:
1. Relating to Damascus or the Damascenes.
2. Having a wavy pattern as on Damascus steel.
3. Sudden and significant.
ETYMOLOGY:
After Damascus, the capital of Syria. Earliest documented use: around 1386.
For adjective 3: From St. Paul's conversion from an anti-Christian to a Christian while he was on the road to Damascus, as described in the New Testament.
USAGE:
"John Cheever once declared, 'All literary men are Red Sox fans.' Ever since, the team has been the subject of more damascened prose, more classical analogies, than any franchise in American sports."
Charles McGrath; The Way We Live Now; The New York Times; Aug 22, 2004.

"Support for Assad is especially strong in Syria's two largest cities, Damascus and Aleppo, where residents are wealthier. Some Damascenes proudly wear baseball caps with Assad's face on it."
Why Many Syrians Still Support Assad; The Christian Science Monitor (Boston, Massachusetts); Sep 14, 2011.