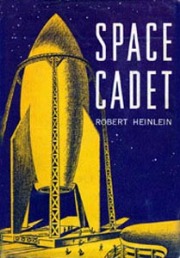 MEANING:
noun:
1. A trainee astronaut.
2. A person who behaves strangely or appears to be out of touch with reality.
ETYMOLOGY:
From Robert Heinlein’s 1948 novel Space Cadet. Why the second sense of the term? The book inspired TV and radio shows and comics and the term became popular. Eventually, the meaning shifted and now a space cadet is one who is spaced out or has their mind in space, probably as a result of drug use. Earliest documented use: 1948. Other words coined by Robert Heinlein that have become words in the English language are grok and waldo.
USAGE:
“It seems odd to think of how [Kate] Bush was once popularly perceived: not with the reverence she’s held in now, but as a dippy space cadet with a penchant for saying ‘wow’.”
Alexis Petridis; Kate Bush -- Every UK Single Ranked!; The Guardian (London, UK); Nov 23, 2018.