Jul 17, 2019
This week’s theme
Words originating in the moon 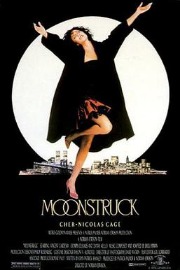 MEANING:
adjective:
1. In a dreamy state.
2. Romantically dazed.
3. Mentally deranged.
ETYMOLOGY:
From the belief that a person behaving erratically was under the influence of the moon. From moon + struck, past participle of strike, from Old English strican. Earliest documented use: 1674.
NOTES:
The moon never made anyone loony, but it’s a popular excuse for erratic behavior. No one is turning into a werewolf, whether it’s a full-moon or new moon. See this article Lunacy and the Full Moon from the Scientific American.
USAGE:
“Fantasio is a moonstruck student who adopts the persona of a sad clown to woo the Princess Elsbeth, soon to be married against her will to the Prince of Mantua.”
Tim Ashley; Opera: Fantasio; The Guardian (London, UK); Dec 17, 2013.

“Recall that Jerry Brown has been the [California] governor twice. He started pushing for clean energy during his first term back in the 1970s, when most people thought his starry-eyed talk about solar and wind power was crazy. Those and other exploits earned him the sobriquet ‘Governor Moonbeam’. Now we know he was not a moonstruck hippie; he was a visionary.”
Justin Gillis; How Jerry Brown Can Seal His Legacy as a Climate Champion; The New York Times; Sep 7, 2018.

See more usage examples of moonstruck in Vocabulary.com’s dictionary.
A THOUGHT FOR TODAY:
There are stars whose radiance is visible on Earth though they have long been extinct. There are people whose brilliance continues to light the world though they are no longer among the living. These lights are particularly bright when the night is dark. They light the way for humankind. -Hannah Senesh, poet, playwright, and paratrooper (17 Jul 1921-1944)