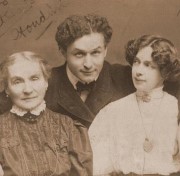 MEANING:
noun: An escape artist.
verb intr.: To escape.
ETYMOLOGY:
After Harry Houdini (1874-1926), a magician and escape artist. Earliest documented use: 1923.
NOTES:
Houdini was born as Ehrich Weiss, but he admired the French magician Jean-Eugène Robert-Houdin so changed his name. His nickname Ehri became Harry. Watch a Houdini straitjacket escape in Houston, 1923: (video, 3 min.). How did he do his magic tricks and escapes? Read all about it here. In his later years, Houdini devoted his life to debunking psychics, mediums, and other fraudsters. He worked with the Scientific American magazine to expose them. Also see, Houdini vs Arthur Conan Doyle.
If I had my way, I’d give a subscription to the Scientific American to every person on this earth, especially to lawmakers. Subscribe to the magazine here. (and no, we are not paid to say this).
USAGE:
“But Andrews has proven himself a Houdini when it comes to escaping such traps.”
Brett Martin; Top Brass; Vanity Fair (New York); Mar 2021.

“Lucy has houdinied out of her car seat and is now climbing into the front.”
Carrie Mac; Equinox Gales; Antigonish Review (Canada); Winter 2006.

See more usage examples of Houdini in Vocabulary.com’s dictionary.
A THOUGHT FOR TODAY:
A book of verses underneath the bough, / A jug of wine, a loaf of bread -- and thou / Beside me singing in the wilderness -- / Oh, wilderness were paradise enow! -Omar Khayyam, poet, mathematician, philosopher, astronomer, and physician (18 May 1048-1131)