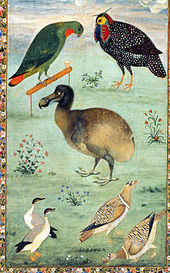 MEANING:
noun:
1. An extinct, flightless bird from Mauritius, related to the pigeon but of the size of a turkey.
2. Someone or something that is old-fashioned, ineffective, or outdated.
3. A stupid person.
ETYMOLOGY:
From Portuguese doudo/doido (silly, fool). Ultimately from the Indo-European root ors- (buttocks) which also gave us ass, cynosure, and squirrel. Earliest documented use: 1628.
USAGE:
“When the spotlight fell on Alvaro Morata, it shone on a dandy not a dodo.”
Graham Hunter; Magical Morata Shows He is Seriously Good; Mail on Sunday (London, UK); Sep 20, 2015.

“But the government should have little reason to believe a broadcasting and telecommunications regulator is a dodo.”
Kate Taylor; Sex, Television, and Canadian Content Rules; The Globe and Mail (Toronto, Canada); Dec 27, 2014.